That looks really interesting. I haven't been able to find it streaming for free yet, but for people in the US who want to donate to PBS, the entire program seems to be streaming here. I'm assuming it's US only, anyway. Looks like it's only $5 a month.

it was on youtube for a while i think, i remember seeing the track

I’m pretty excited right now because thanks to a Youtube commenter I finally found the „lost“ Golden Apollo Stars tour that happened in August 2002, while JT was already in TMV!

I remember somebody claiming there‘s video footage of Golden from that tour. I need to find it!

Also found a previously unknown Defacto performance @ Spaceland on July 30th, 2002. I should check the websites of the clubs they used to play in around that time for Defacto shows. The Long Beach one w/ Frusciante happened while Jon was on mentioned tour with Golden.

I’m pretty excited right now because thanks to a Youtube commenter I finally found the „lost“ Golden Apollo Stars tour that happened in August 2002, while JT was already in TMV!

I remember somebody claiming there‘s video footage of Golden from that tour. I need to find it!

Also found a previously unknown Defacto performance @ Spaceland on July 30th, 2002. I should check the websites of the clubs they used to play in around that time for Defacto shows. The Long Beach one w/ Frusciante happened while Jon was on mentioned tour with Golden.

The 07/30/2002 Spaceland show is referred to as an "one off show" in the Nov '02 GSL newsletter, which also states they "unveil[ed] a handful of new compositions that go to eleven on the ruffness scale. Keyboardist Ikey was in fine form, even guesting with GOGOGO AIRHEART as a warm-up. Ikey left THE MARS VOLTA but is still a member of DE FACTO - rumor is he will also be appearing on the upcoming MV album too, so who the fuck knows?"

The part about Ikey leaving TMV, yet still appearing on DITC, reminded me of this german Interview from the March/April 2003 euro tour with Jason Lader, where Omar is quoted saying "we don't have a full-time bass player and keyboard player at the moment, we hadn't had the time yet to search for full-time band members" ("Wir haben derzeit keinen festen Bassisten und Keyboarder, wir hatten noch keine Zeit, feste Mitglieder zu suchen."). Seems like Ikey wasn't considered a band member even after De-Loused was recorded. I wonder if he was ever considered a full member, given the TMV/TMV group distinction later on and that Marcel almost fully took over keyboard duties in the studio on later records. (regardless of what his "official" status ever was, he will always count as a full member to me)

The part about new De Facto compositions is consistent with the June '02 GSL newsletter stating that "De Facto have begun assembling tracks for their next (and as yet untitled) album, due for release on GSL sometime in the early spring" (this never happened)

My suspicion is that those were the De Facto sessions featuring John Frusciante mentioned by Sonny Kay in his recent email to me and this GSL bio from 2003, which says "Omar mentioned more than once that John would be playing on the "next" DE FACTO record". According to RHCP tour history John, who at the time had finished working on BTW and had not started recording SCWP yet, had almost a full month off after meeting Omar (April 24th - May 26th), and then another full month (Aug 8th - Sep 16th) right around the time when Jon Theodore was still touring with Golden (so TMV was on a break) and the De Facto show in Long Beach happened.

There was another De Facto show scheduled on Oct 23rd, 2002 at the Chain Reaction in Anaheim, but they cancelled due to "recording commitments" (DITC sessions had already started)

One last fun fact: Even though the story of Frusciante meeting Omar is well documented with multiple sources, the rumor about De Facto opening one of his solo shows a year earlier in 2001 is actually true. It was this show. 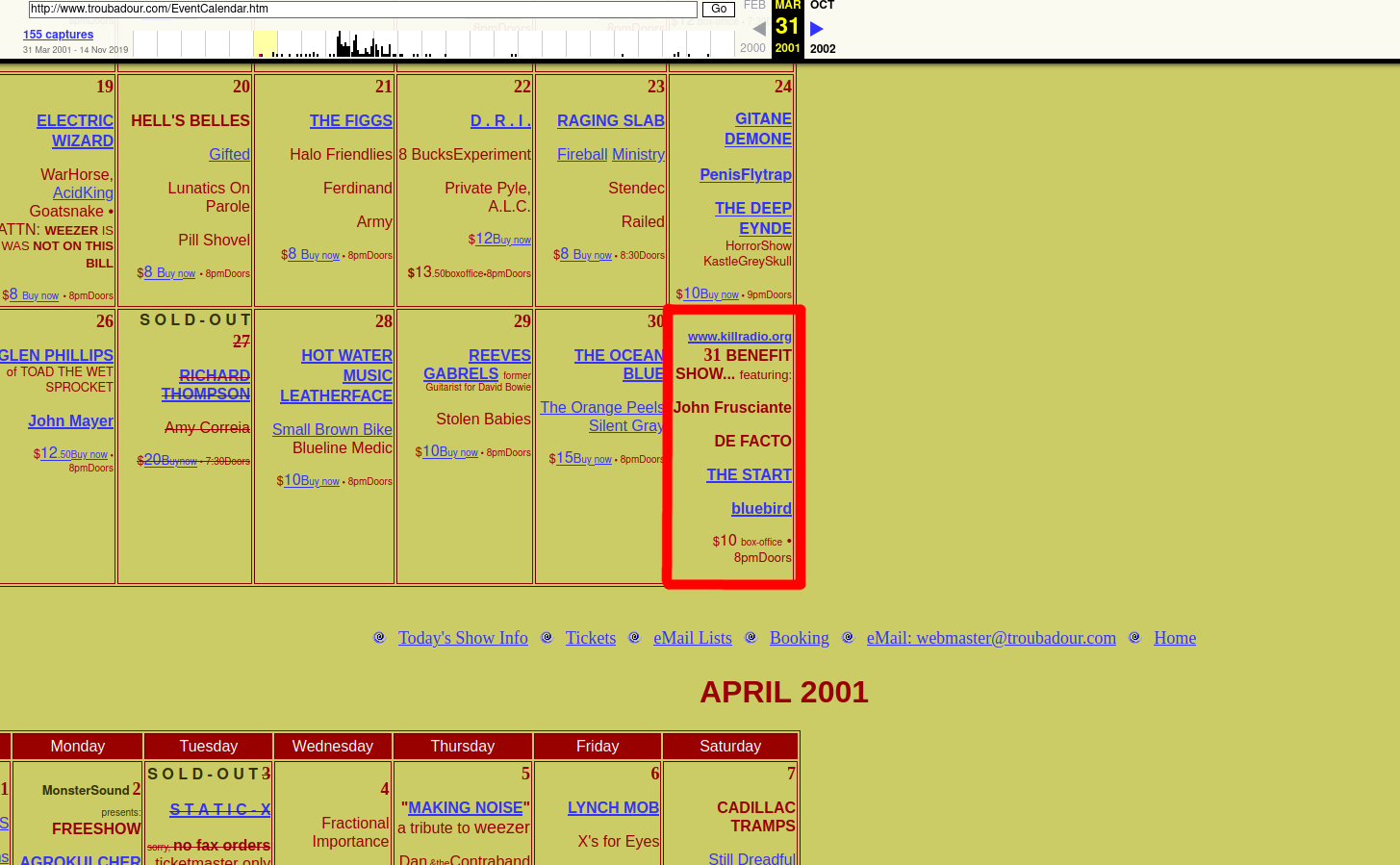 Totally forgot about this.

Also discovered I have RJ's Prospectors on my harddrive.  Forgot when that was recorded and if anything was ever done with it.

i dont recall juan being a part of oso? anybody know when they recorded?

Also discovered I have RJ's Prospectors on my harddrive.  Forgot when that was recorded and if anything was ever done with it.

I think RJ Prospectors was during the downtime after TBIG tour wrapped.

Oso might have been in 2010 when Cedric was mostly playing drums instead of writing lyrics for Noctourniquet.

Live: With Other Musicians and misc.

This section contains some of John’s live appearances other than (typical) RHCP and solo ones.

John with the Mars Volta

John with the Mars Volta

Those were the ones that I found, the additional ones that you have placed do not appear in the sources that I searched on my own. In addition to that I found this mention:

'Omar Rodriguez-Lopez mentioned in interviews with El Patas in August 2011, Rolling Stone in March 2012 and Musikexpress in April 2012 that John had made around 300-400 recordings during this period, which at the time he had no intentions to release whatsoever.'

Some research on TMV/ORL engineers.

Was hoping to find out some information about the Ipecac albums based on the few credits we got.

- Some of them (Newport, Scheps, Carranza) helping out Omar with his solo stuff in the early years.

- Jon Debaun = Omar's personal engineer until suffering from a mental breakdown during the making of TBIG.

- Is replaced by Lars Stalfors, who isn't credited on the earlier Amsterdam albums and was likely the engineer for additional recordings made in 2007.

- Shawn Sullivan established himself as Omar's main mixing engineer at the time, Pete Lyman as the mastering engineer. Lyman is also the founder of Infrasonic Sound, the label that put out Apocalypse, ORL&JMW & Absence in the US.

- Absence credits are taken from Telesterion. They seem plausible, Shawn Sullivan probably mixed it and Jon Debaun probably engineered whatever was recorded after 2001 (similar to AMD). We don't know who engineered the sessions in 2001 though. Alex Newport confirmed he did not.

- Co-engineering Octahedron / mixing Crypto were Shawn Sullivans last credits in the old TMV/ORL world. His name did not appear on anything until Ipecac series.

- Xenophanes is the only ORL record mastered by TMV guy Howie Weinberg. Another hint this record had a bigger budget (besides being recorded in a big time studio).

- Chris Common started working with Omar in 2012. I got the USM credit from his old website.

- Omar moved from Mexico back to El Paso around that time when his mother died.

- The Rodriguez-Lopez house was turned into a recording studio called Twin Hills Recording and is operated by Chris Common (to this day).

- The information about Sworn Virgins being one of the last solo albums Omar recorded, Corazones being finished after his mother died & Blind Worms Pious Swine being the first one recorded after his return to El Paso all coincide with Chris Common engineering.

- Therefore Umbrella Mistress is probably among those recorded in El Paso in 2012/13.

- Seems like Jon Debaun reemerged as Omar's main engineer in Mexico at some point and continued working with him in El Paso.

- Shawn Sullivan reappears on a few of those. He and Lars never engineered with Chris Common.

- The albums that have Shawn's name could be the older ones from circa 2007-2009, when he was still working with Omar.

It's not as clear as I hoped it to be. It still might be interesting to some of you Volta nerds.

Pretty awesome thanks.  We can include most of that info in The Marble Shrine.

Yeah, I've always been interested in who plays piano on Ensayo. Think I'm among the minority that listens to it more than the originals, and I've always found it difficult to believe that it was Omar although I believe he was credited for it.

There were no credits

imo, it's reasonable to guess that it was either Marcel or Leo Genovese. but also we don't know so ???

Rich Costey talking with Andrew Scheps, interesting bits about the Volta (https://youtu.be/MuaRajNIJtE?t=3263 - starts around 54 mn) most notably them firing Rick Rubin during the mixing process and how Frances was the most challenging mix he ever had to do, and them going crazy and mixing it three times. Also mentions Interalia

Thanks man, I was soooo hoping for Scheps to talk more about his work with TMV since he has been so present on Youtube in recent years. Him talking with Rich Costey is exactly what I was looking for.

Speaking of engineers, here's a rather new Interview with Alex Newport where he speaks about meeting ATDI and recording I/C/O. Unfortunately the interviewer takes the conversation into a different direction when Alex starts talking about TMV.

Back to The Mars Volta